Explore the American West in Olympia

From intriguing historical sites to abundant wildlife, and a lively arts and culture scene, Olympia offers the best of the American West.  Check out the city’s great offerings. 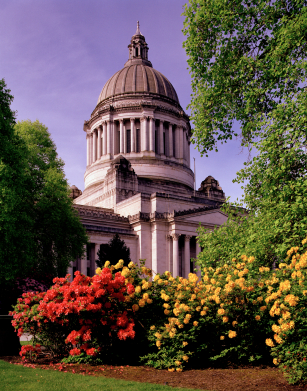 See historical landmarks like the monument that highlights the end of the famous 1845 Oregon Trail.  Definitely take advantage of a guided tour of the Washington Sate Capitol building to learn about Washington’s history.  Other significant sites include the 1800s Henry Homesite, the Woman’s Club of Olympia, which is the oldest of its kind in the West.  If you enjoy touring old, stately houses, don’t miss the Governor’s Mansion and the Victorian William G. White House.

While the afternoon away in some of Olympia’s interesting museums like the Olympic Flight Museum, where you can see a number of vintage military aircraft.  Learn about the extensive history of Washington and its capital city through various objects of history, art and culture at the Washington State Capitol Museum.  Learn about the cultural heritage of the local Native American tribes at the Squaxin Island Tribe Museum.  Turn the children loose in the Hands on Museum where they can engage in more than 55 exciting interactive exhibits.

Olympia packs a thriving arts and culture scene.  Visit the State of the Arts Gallery and see contemporary works of pottery, glass, paintings and jewelry by more than 200 Northwest artists, including Native Americans.  While in Olympia, be sure to have a look around at the Monarch Sculpture Garden.  Stroll at leisure around the wide, outdoor art park and marvel unique art objects.  Explore a maze, a fantasy garden and a music garden featuring artworks that produce melodious sounds when you interact with them.

For quality theater and orchestra performances, Olympia offers several good choices such as the Capital Playhouse, the Olympia Family Theater, or the Washington Center for the Peforming Arts.  Watch vintage films from the Olympia Film Society at the Capitol Theater.

A must do while in Olympia is Percival Landing, one of the city’s most popular landmarks and attractions.  Here, at this beautiful waterfront park, you can enjoy various works of outside art and sculptures, walk along the boardwalk and watch your children play at the playground.

The city also offers great opportunities for wildlife viewing at places like the Nisqually National Wildlife Refuge, which shelters thousands of acres of marshes and grasslands where you are sure to see numerous species of birds and other wildlife.  If you head over to 5th Avenue Bridge, you will find a popular spot for sighting salmon, sea lions, herons and more.  Only minutes from the downtown area, the Priest Point Park offers more than 300 acres of hiking trails and wildlife viewing opportunities.

A must do in Olympia is the Farmers Market. Open every Thursday to Sunday in the summer and every weekend during winter, the market is a great place to find a bargain with the likes of fresh produce, meats and seafood, baked goods, dairy products, nuts and candies.  Also check out the stalls selling flowers, homemade soaps, wood crafts, fashion accessories and jewelry.

When you travel to Olympia, you may find that it rains quite often.  Fortunately, many of the city’s attractions offer indoors.  Check out online hotel deals today and begin making plans for your vacation to Olympia.